Well not really, I am feeling happy and bubbly but when I was walking around my platform with backdrops I once again found this little jewel from Foxcity and instead of waiting till my mood fitted the scenery….I decided to use it right away. 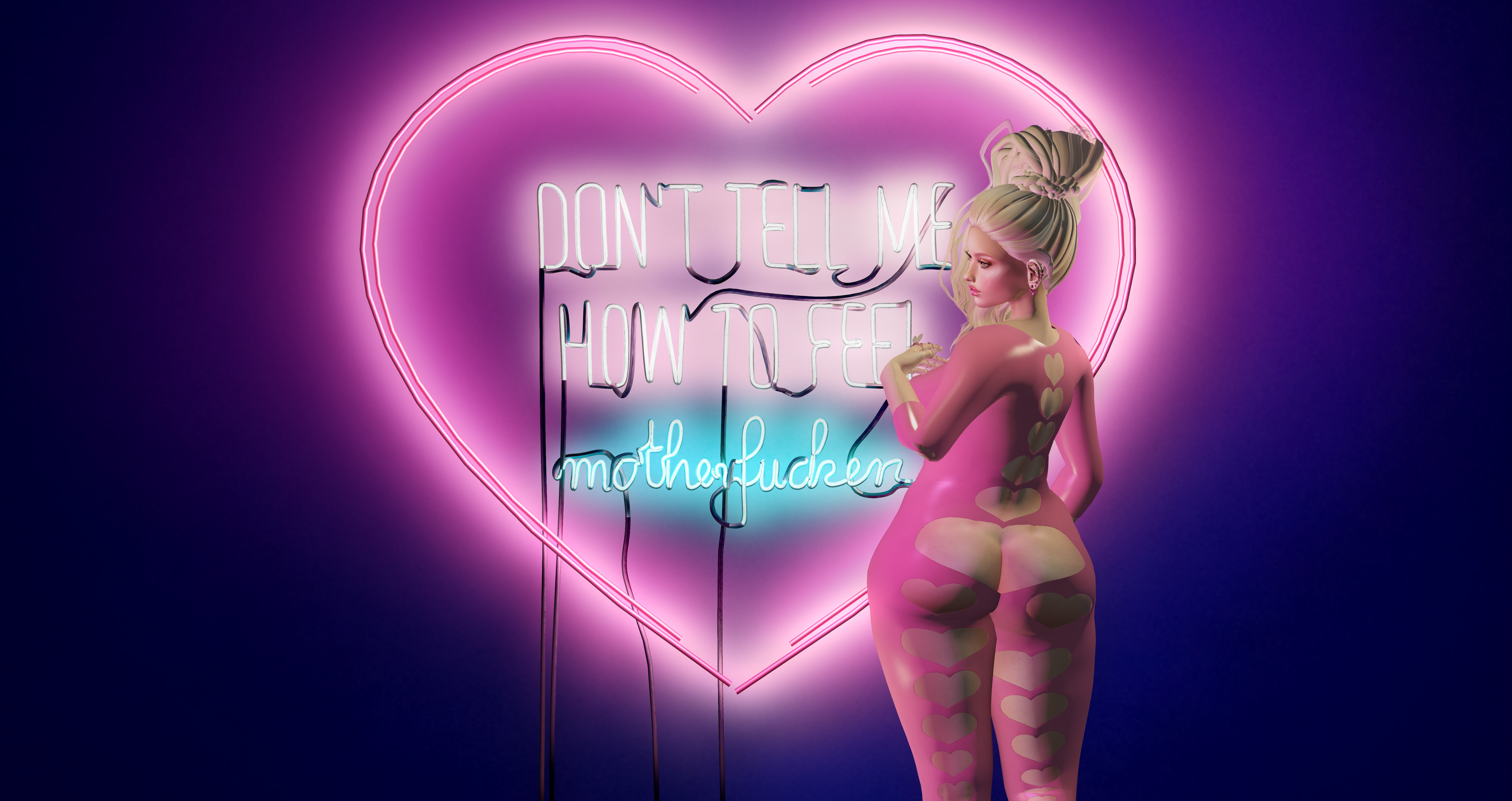 Now in this picture you can find two creations from [NYNE] the first one is the new hairstyle named Dabur that you can get right now in the mainstore. The second outfit is the sexy little outfit called Heart Bodysuit but for this sexy little item you will have to go to the current round of The Fetish Fair.

One of the reasons I like this bodysuit so much (besides it looking deliciously wicked) is that with the hud you can not only change the colour of the suit, but also the gloss and opacity. And especially the opacity is fun, if you feel daring you can make the suit very see through! though as you can see I opted to go for the more modest look.

“Leash laws are strictly enforced” that is what the sign said, but sheeesh leaving a girl leashed for hours when you go shopping is so not nice! Here I am leashed to the sign in front of a store and hours later still am leashed *sniffles* Have I been abandoned? 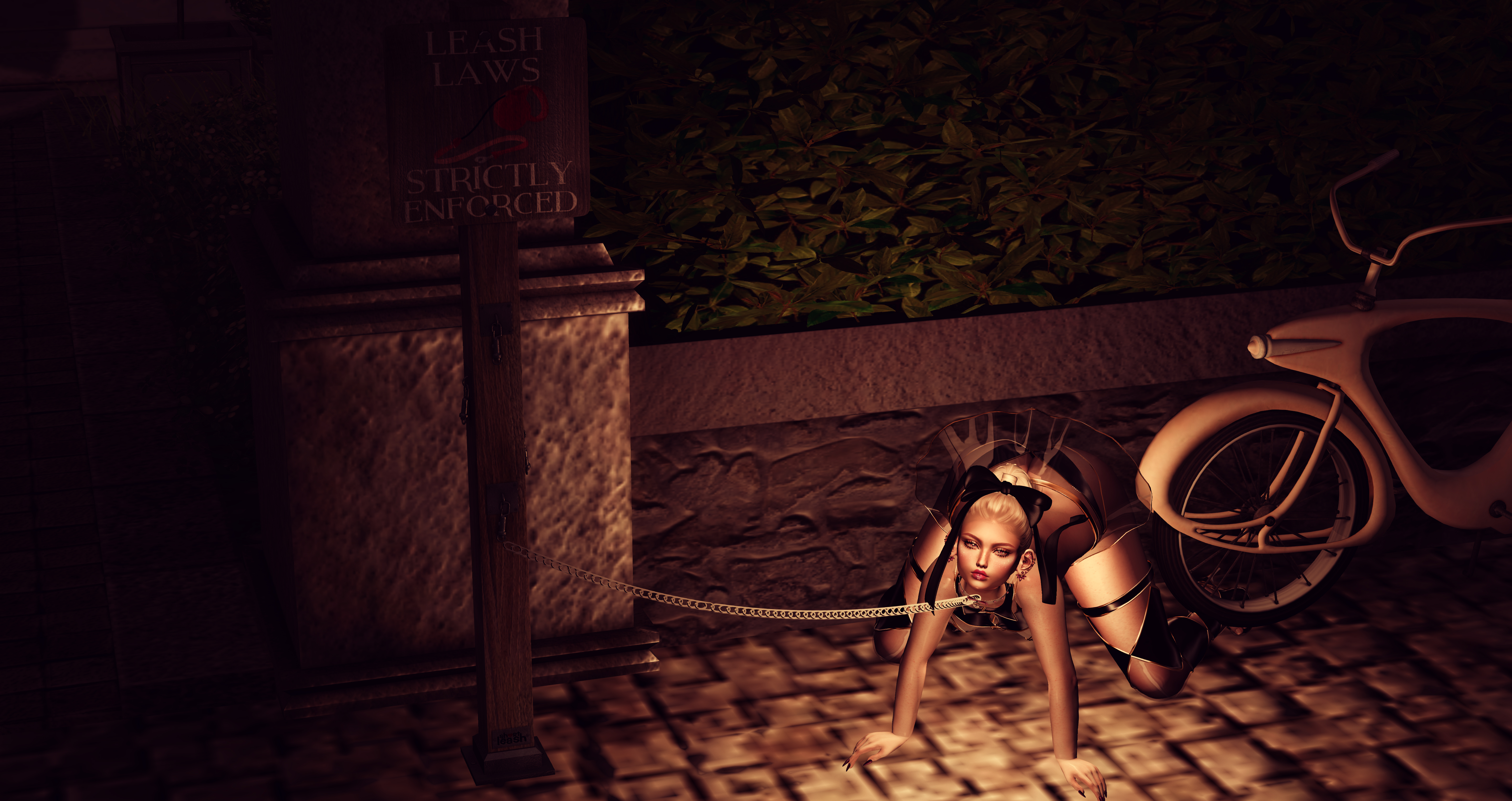 Well I guess I deserve to be leashed and left for the night, after all the deadline to post this item has almost gone. So….either you dash over real quick to The Man Jail Event or you will have to wait a little longer and buy it at the mainstore. If you decide to head over to the event, the item you want to look for is the Obedient Pet Hitch which as you can see is also perfect to teach your less obedient pets a lesson.

And that is the theme of this picture, entering the club alone, and leaving with a cute pet! There are a few things in this picture that I want to point out, to begin there is the leash holder called Loyalty Leashed Retractable Leash r from Short Leash this item was the group gift of november and can still be found in the mainstore.

I am pretty sure your eyes have been drawn to the outfit I am wearing, nice and kinky just perfect for clubbing…well at least for those special kind of clubs. The outfit I am wearing in this picture has been made by Niu called Dita bondage, this sexy little outfit is for sale right now at The Kinky Event

Now I have to admit I have not seen the movie at all (yet) but from the title I just have to assume it is related to computer gaming. However I can imagine that there would be a point where you hear “Ready player One?” and you just think…..”Oh heck no I need a break!”. 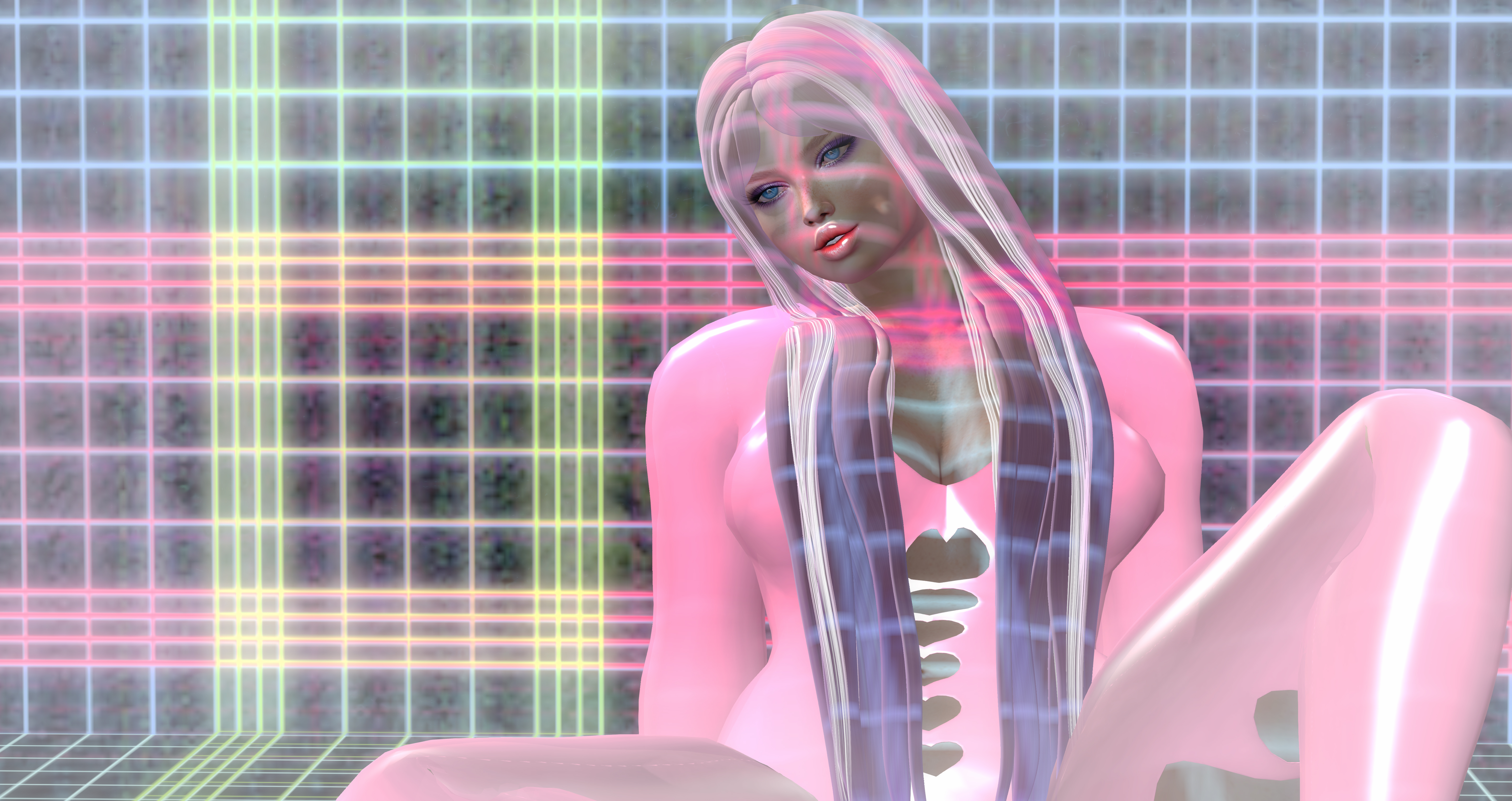 What the outfit has to do with that theme, well absolutely nothing! In this picture you see two creations by [NYNE], firs tthere is the new hairstyle named Serotta that you can find at ON9 right now. The outfit I am wearing is also from [NYNE] and is called Bodysuit Heart. And I have to tell you something about these clothes, or perhaps I already done and simply cannot remember.

The outfit does come with a hud, and as you come to expect with the hud you can change the colour of the outfit, but there is more. You can set the shinyness of your outfit and here is the thing that I absolutely love, you can change the Alpha level of the outfit, which in this case means you can decide if and how transparant the outfit will be. So it can go from “solid” as I am wearing right now to completely see through.

What can be sweeter than being covered in sweet little kisses by a loved one? I can tell you what is, absofreakinglutely nothing! 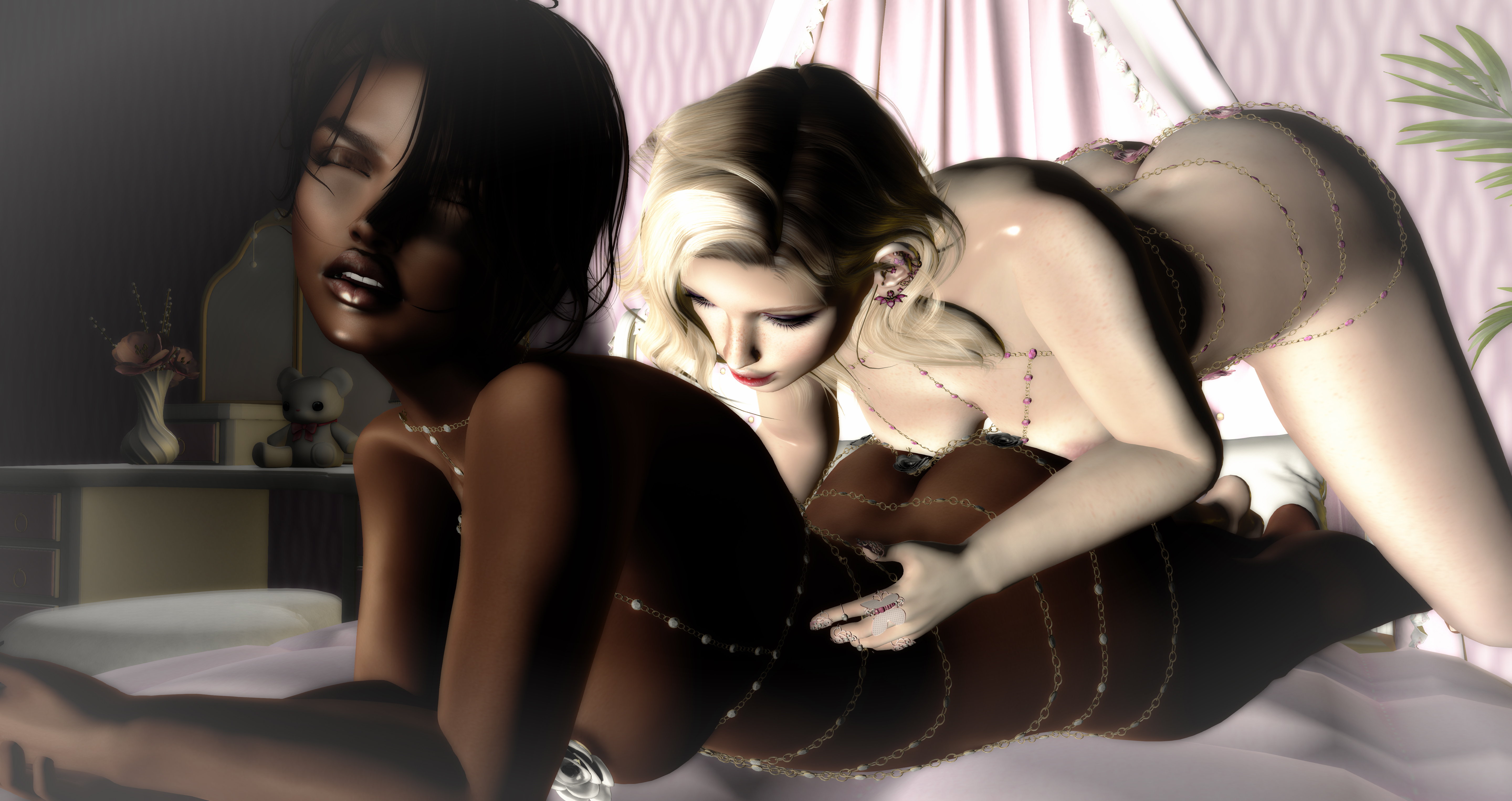 The centerpiece of this picture is of course a creation you will have to visit The Kinky Event for to get. And as you can guess (I hope) it is a harness / body jewel created by PerveTTe called Seduction Rose. The set consists  of both the “harness” as well as the pasties, and considering how shy and modest I am I of course opted for wearing the pasties as well!

So as I mentioned in my previous post, The Kinky Event is going on strong, and todays post again displays an item from there. This time the item in this picture is a creation from Candy Kitten named Look at me. 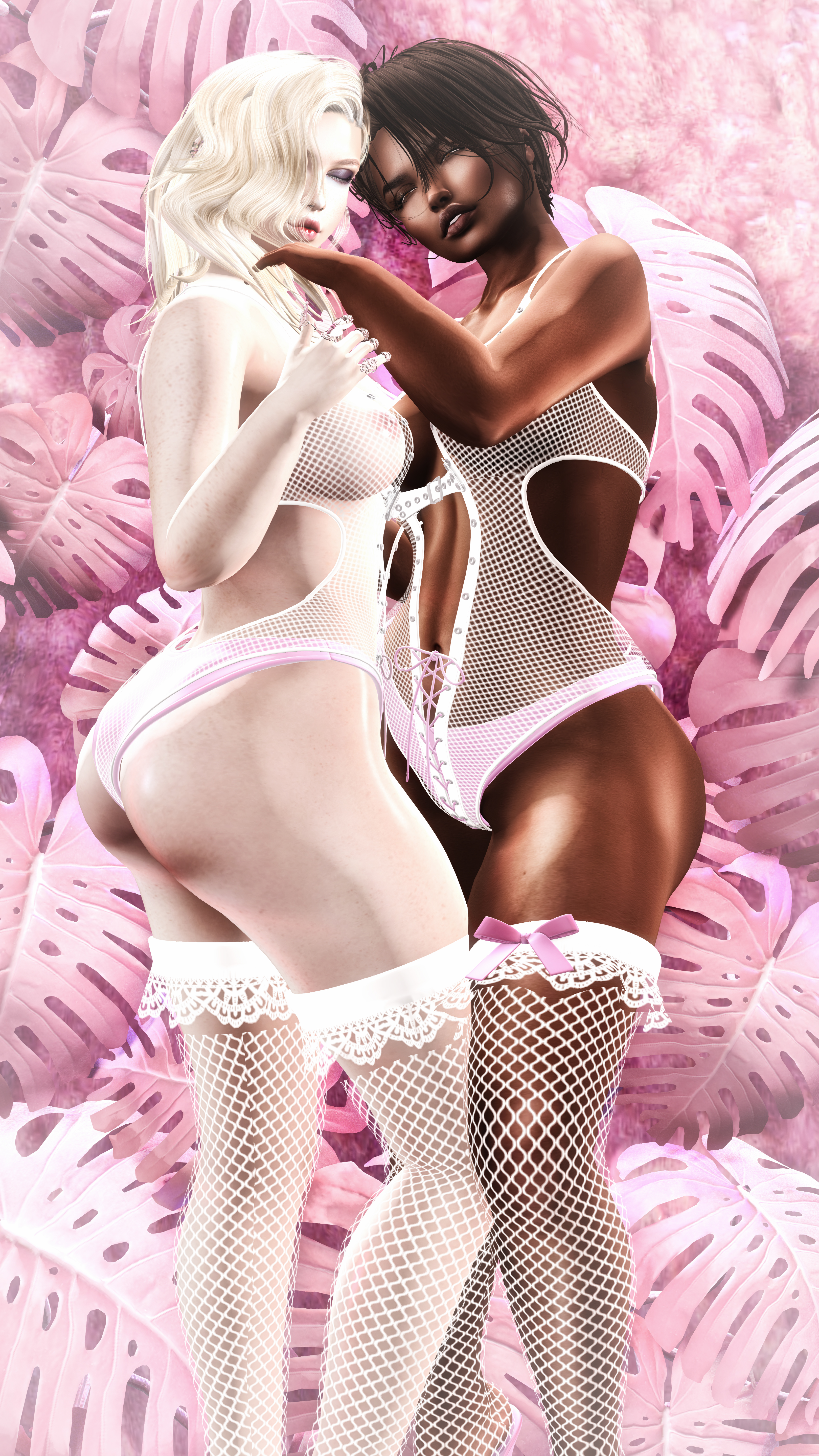 And wearing this bodyuit I can guarantee that you will be turning heads and people will most definitely look at you.  Now there is another item in this picture from Candy Kitten and that is the Cute princess heels and socks that you can find right now at Kawaii Nation.

My first post of 2019, and even though people say you cannot improve on perfection I did make a new years resolution. And my resolition is to post more! the last few months of 2018 I been kind lazy not even able to do a post a month, bad Alor bad bad! 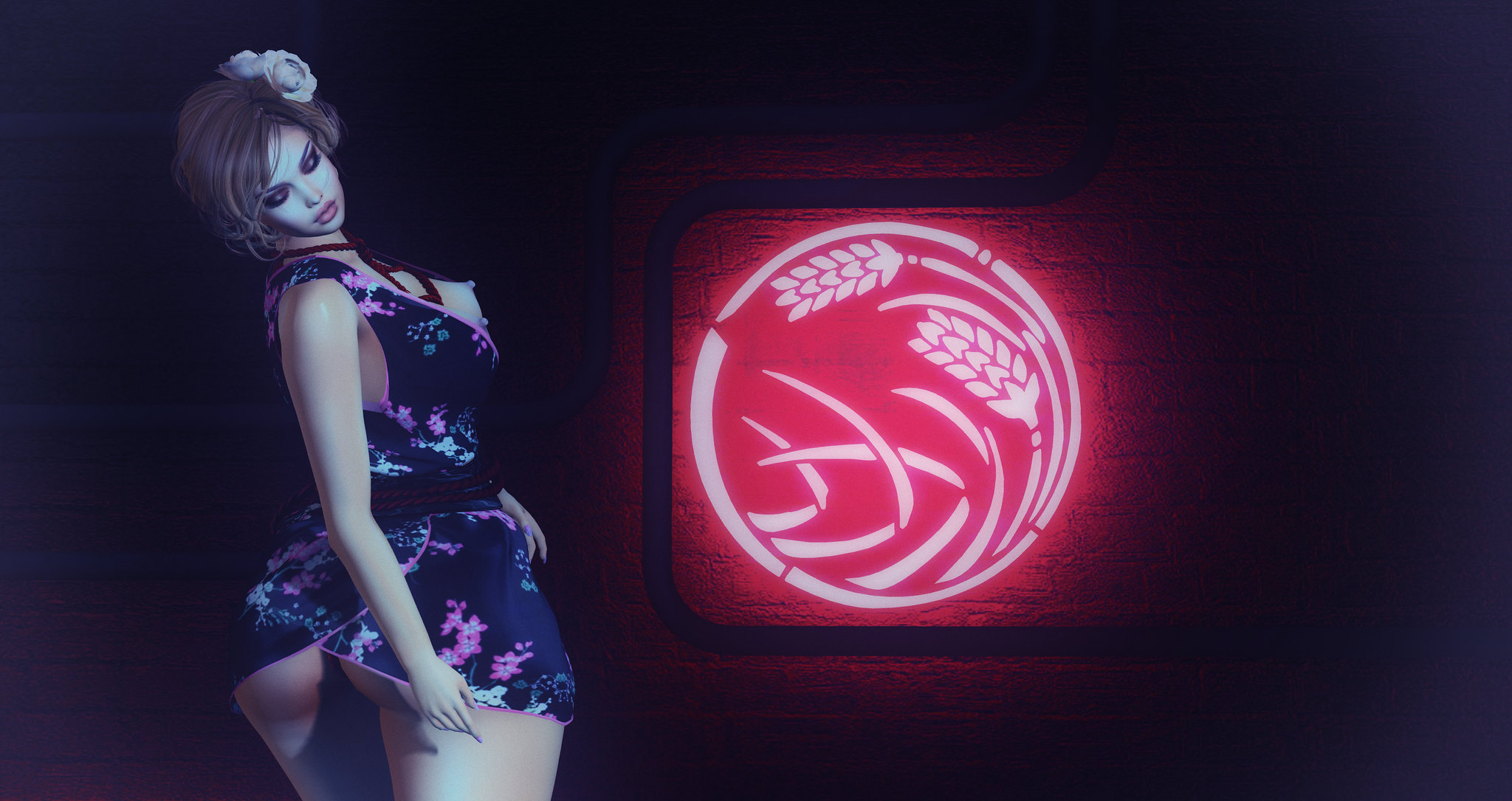 And Lucky for me The Kinky Event. is in full swing so I can inmediately work on my resolution. So in my first picture of 2019 I am showing a creation of Luas called Yume. For this picture I choose to wear the kimono as well as the shibari, but as you might have guessed you can wear either or, and I do have to admit just wearing the shibari makes for a very sexy look as well.

It is Christmas season, the time of year where every boy and girl tries desperate to be good to get on Santa’s “nice list” and get a present. Screw that, be naughty! Sure good girls get a present from Santa at Christmas, but naughty girls get presents all the time. So be naughty, safe Santa the trip. 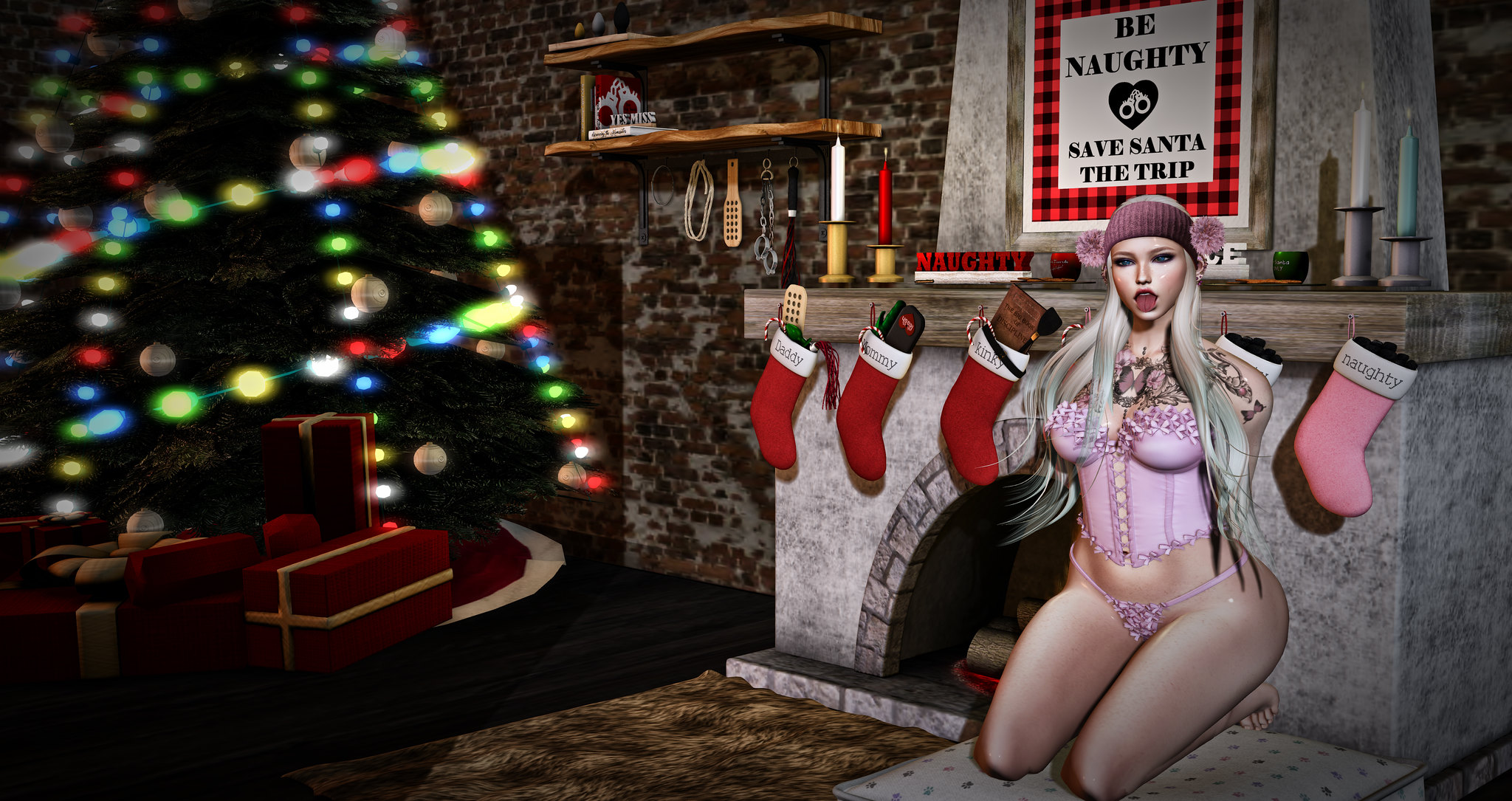 There is lot to mention about this picture, new items that you have to go to one of the events for to get. Lets start with The Kinky Event., in this picture there are two items that are from this event. First there is the lingerie set from Moon Elixer called Your Princess. The second item from The Kinky Event is the tattoo from [White~Widow] called Arctic.

But also Short Leash has some new releases that are displayed in this picture, to begin with there is the Naughty & Nice Xmas it is a gacha set that is available right now at the XXX-Event and make for the perfect prop for your kink ispired pictuures….or simply look good in your home. The second item from Short Leash is The Little Sub Pillow that you can find at The Naughty List 3.

Now not for everything do you need to dash to an event, the cute hair that I used in this picture is the latest release by eXxEsS and is called (you guessed it) PomPom.

Well it kinda is a little bit, of course not entirely black and white, but the majority of the scene and the outfit I am wearing is, and well…..I am too! So yeah black and white picture it is for sure! 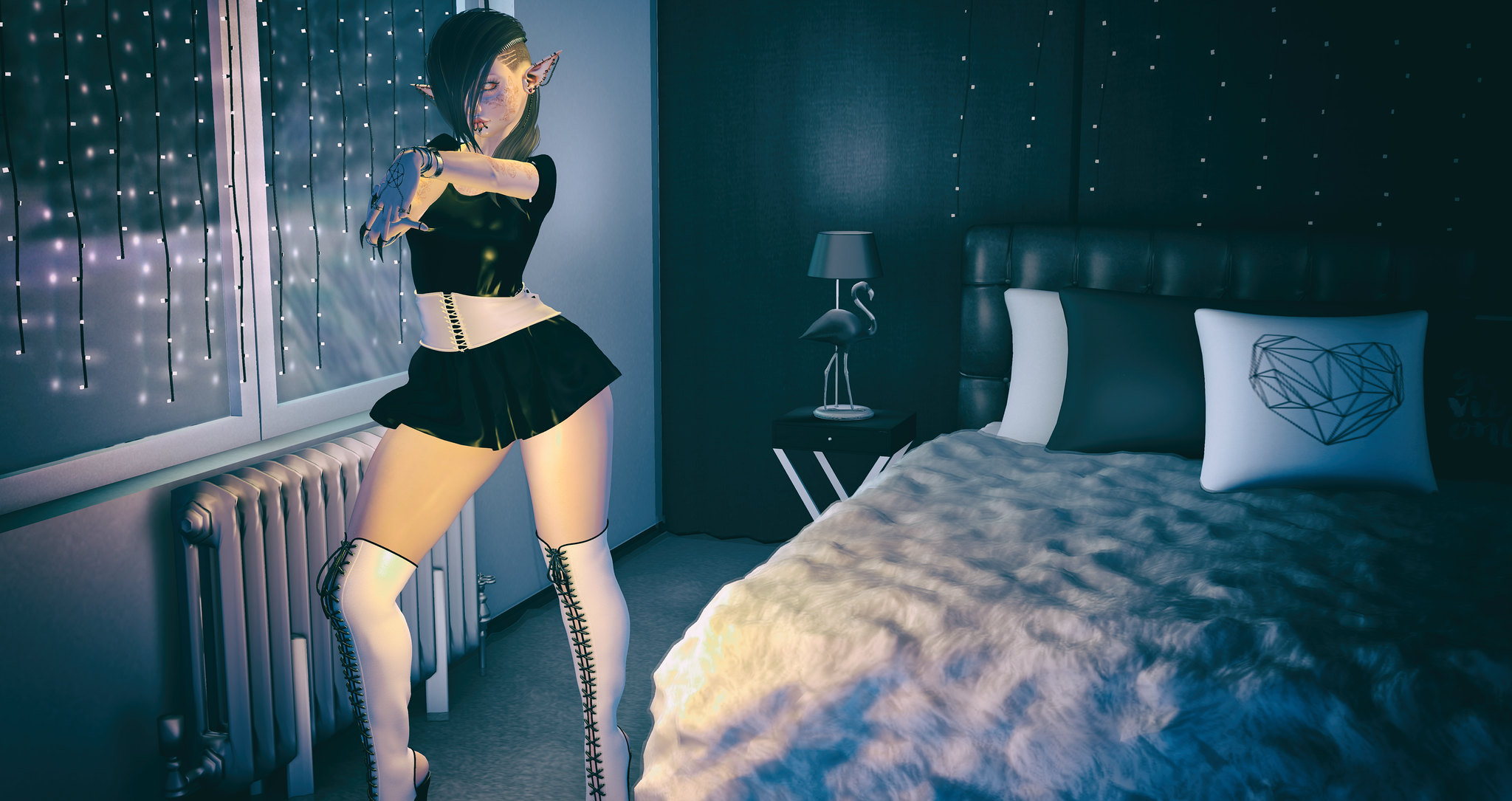 The main attraction of this picture (besides me of course) are the creations from [NYNE] that I am wearing. There is the Kylie Dress that you can get right now at the Seduction Fair, and while you are there be sure to pick up the matching boots named Long High Heels. And if black and white is not your thing, don’t worry! Both the dress as well as the boots come with a hud (colour picker) that allow you to customize the colours to your hearts content.

December is the month where we spoil eachother and especially little kids, over here in The Netherlands it is not uncommon for kids to receive presents twice, once at Sinterklaas and later that month at Christmas. Fun fact for all you non dutch people who are now wondering what Sinterklaas is…..is is the original Santa!

So since this is the month of giving, I decided I once more would become a present myself, and this time I will be a doll in a box. And of course a doll with a twist, perfect designed for adults to play with and have lots of fun.

There are two items in this picture that I want to mention, the “box” that I am in is actually a cage by Dollmart named cage, The cage is actually part of a 3 piece set that is available right now at The Kinky Event. The entire set is called A Kinky Christmas and consists of a cross, bondage horse and the cage shown in this picture.\

The second item in this picture that I wanted to mention is also from The Kinky Event it is a creation by Luas and is called Scarlett.

What's in my closet | Second Life Fashion Blog
Create a free website or blog at WordPress.com.