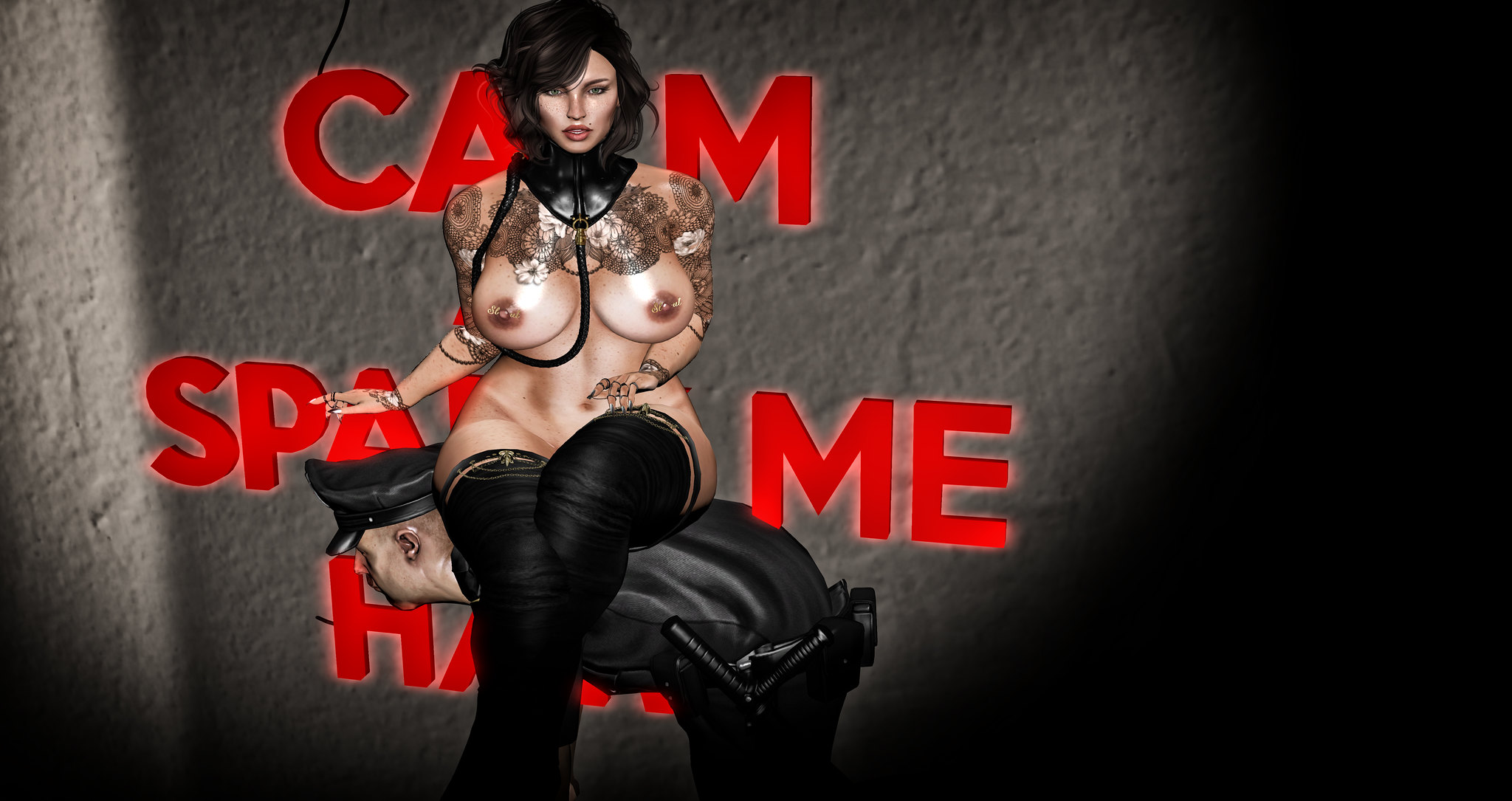 And oh my there is so much going on in this picture, the prop I am using is -believe it or not- from Rezology! That is right the same Rezology that we know from their hair made a mesh photoprop by the name Rezology Cop Chair and well from the picture I am sure you can tell why it has been named that way.

Now you might have realized by now that a new round of The Kinky Event has started, and several items of what you see in this picture are available at the event right now. So shall we start from bottom to top? That way we start with the boots from N-core called Rhonda.

Traveling a bit farther north from the boots we encounter the sexy garnet from Codex called Aradia, From there we go north a bit more…and still a bit more, and you might just have to stare some at my breast (I know terrible right?) to see the next item there, the nipple piercings from Nova called well in this case called slut..

Drawing your eyes away from my breast you will actually finds another item from Nova on me, the rings called Neveah. for those of you that are like me, crazy about bento, do not worry, I am using the bento hands from Vista and these rings work like a charm. Now we are almost there, bear with me just a bit longer, there are two more items from The Kinky Event that I want to point out to you all.

Let’s start with the collar, from VoluptasVirtualis called Ferone. And I know it is off topic but with a shop named like that I so have the urge to flick a wand, chant VoluptasVirtualis and then see if something happens…perhaps it makes me conjure up more sexy items?

Lastly there is a new tattoo from [White~Widow] that is available at The Kinky Event named It and it is not even about scary clowns! Now we have arrived at the end of this quite long pose, thank you for sticking it out this long!

Sometimes the outfit itself is just the perfect title for the actual blogpost, and if you take a look at the picture, I am sure you can tell right away what the inspiration for this title was. 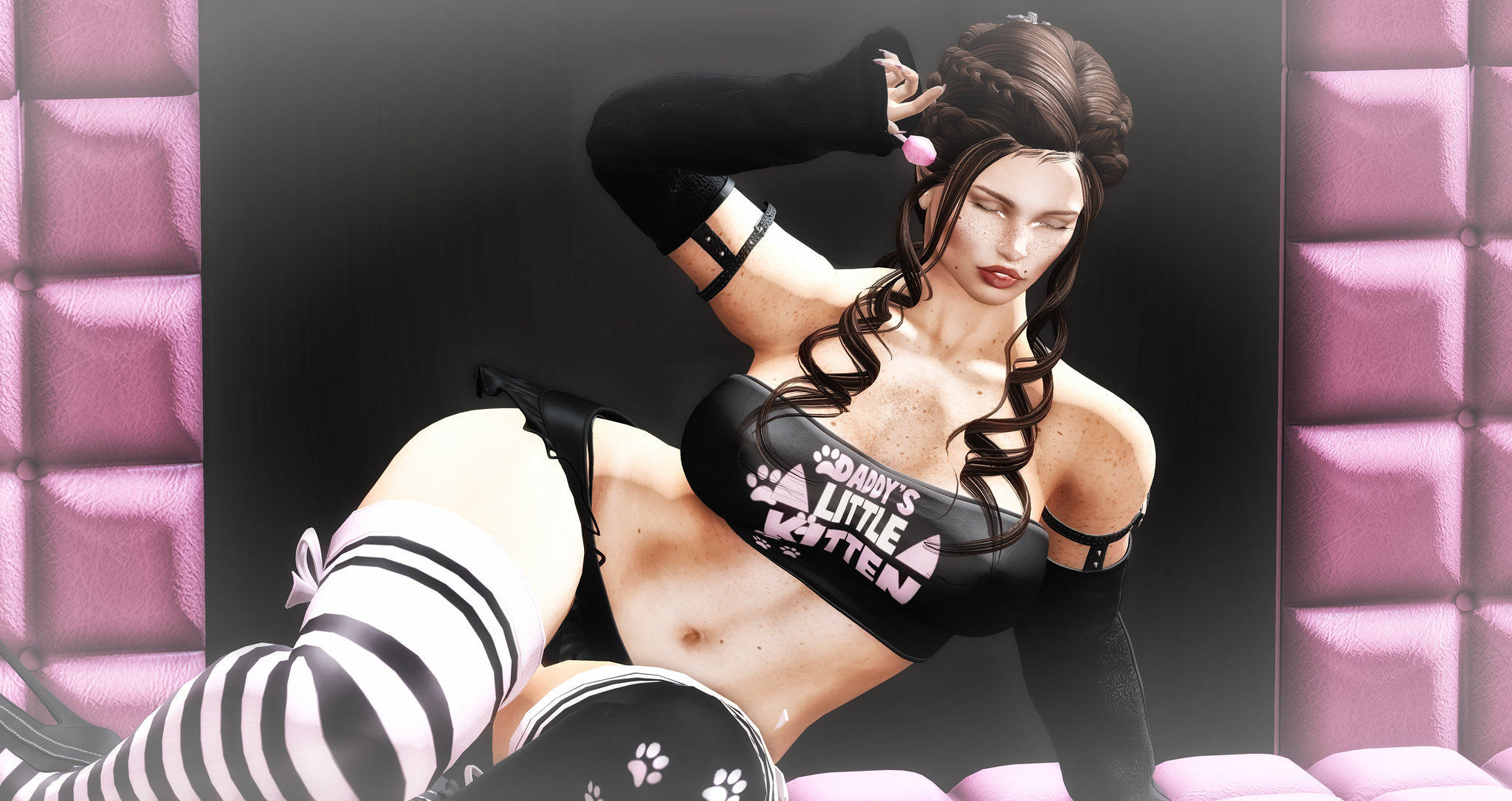 As you most likely can tell from the style of clothes, I am wearing yet another creation from Candy Kitten and no this one is not called Daddy’s kitten, it is actually called Meow Kitty. Not sure why though, cause even when dressed like this you invite pettings…it would not make me meow, just purr…

The itsy-bitsy spider
Climbed up the water spout 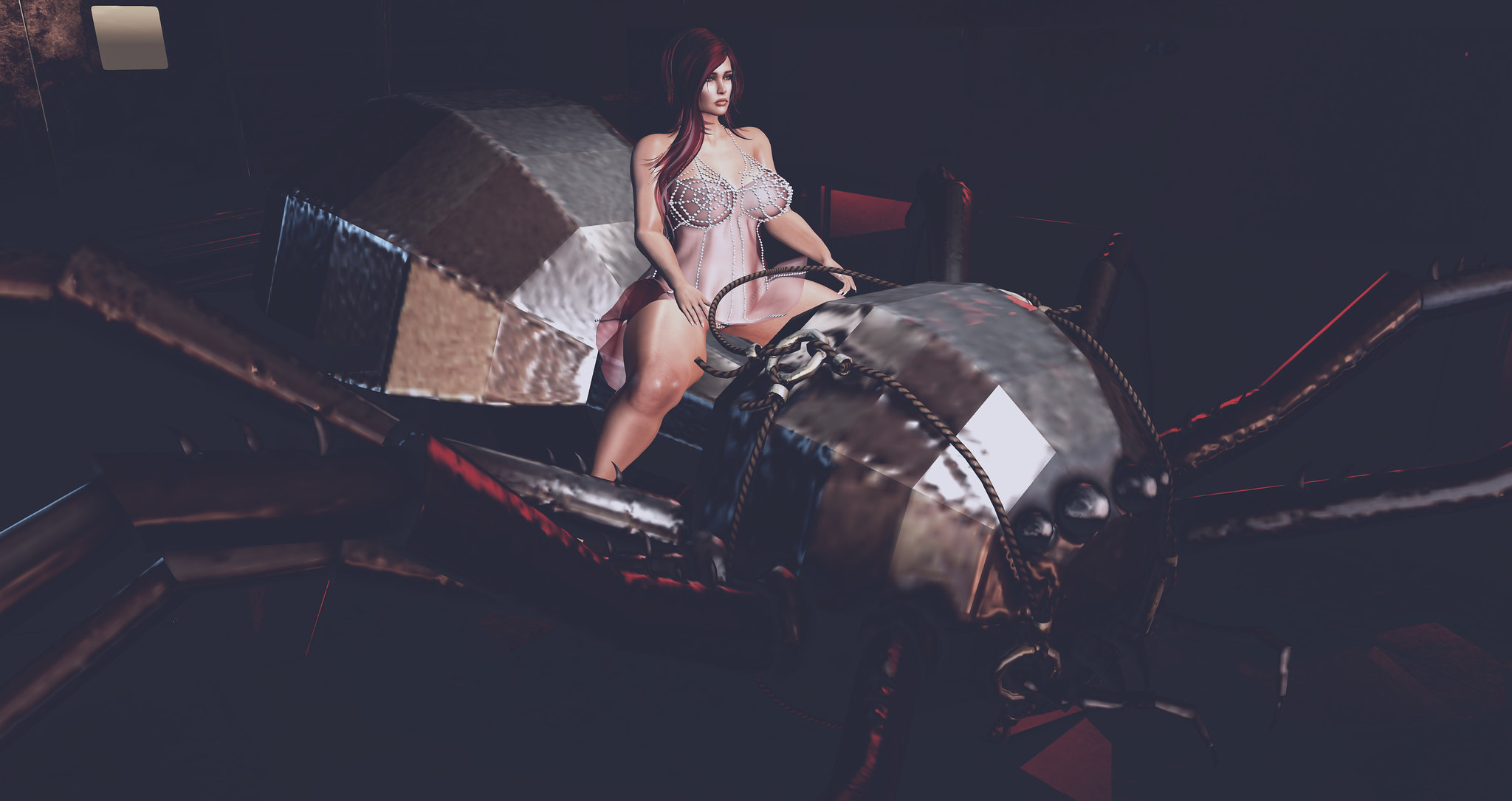 For this round of The Epiphany I am quite sure that Salt & Pepper thought bigger is better. So as you can see most definite not an itsy-bitsy spider…but one huge giant monster!

Do not panic, there is more available from Salt & Pepper at the event than just this gigantic spider (though you definite want to get this!). And several of the items are right here in this picture. The theme of these creations is Webcrawler so whenever you play the gacha machine you will get a prize in that theme.

Some prizes that you can get are not in this picture, and then I am talking about the spider companion or the hair spider. All are just amazing and I am sure once you head on over to The Epiphany and play at Salt & Pepper you will want the entire set.

Those were the exact words a friend told me when I showed her the latest picture I had made. Granted the position of the tattoo might give that impression, but it is really so much more. 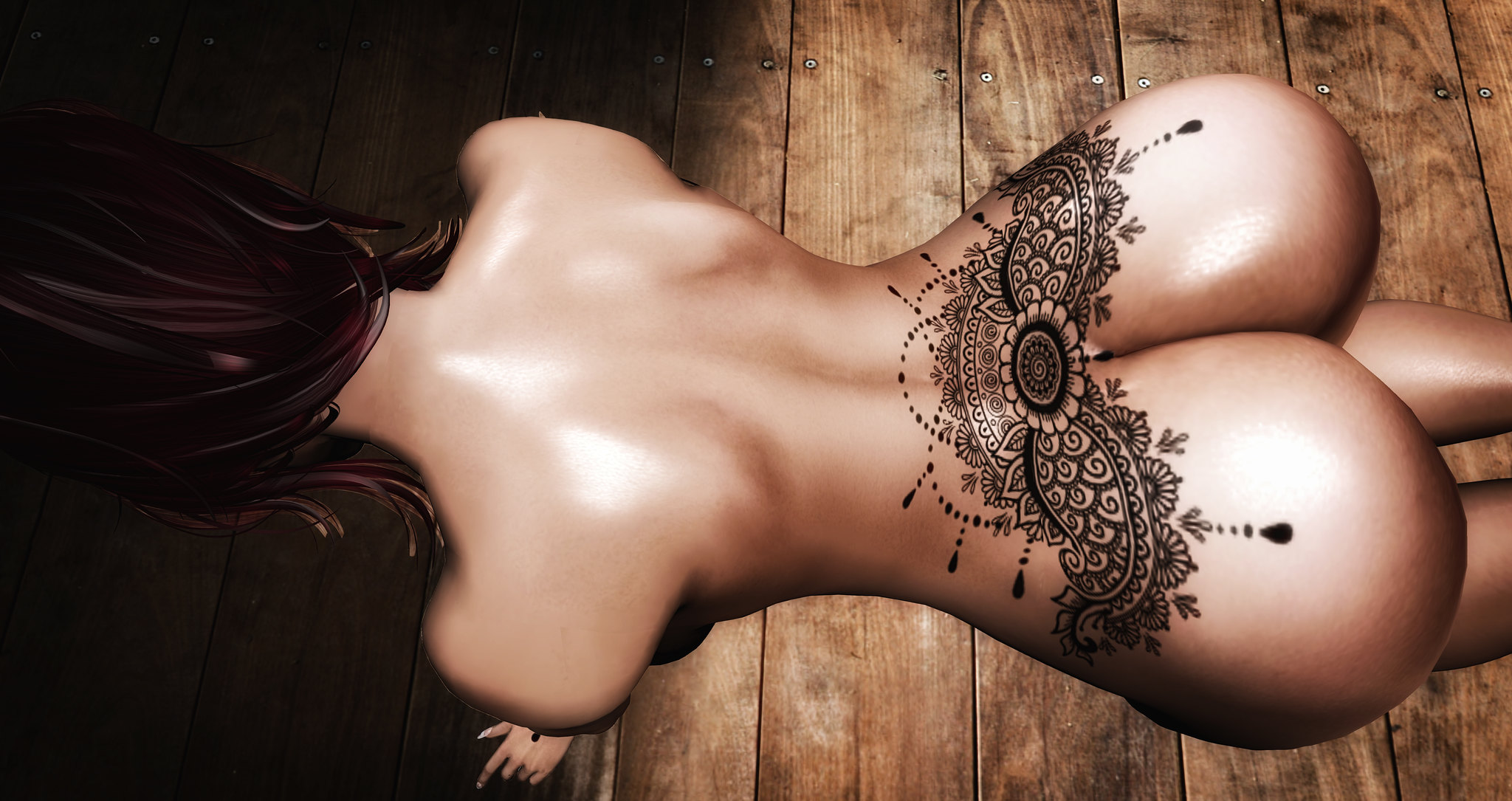 Well not that much more, the tattoo actually covers the hands as well but that is not visible in this picture (that someone else wanted to call “my pov!”). But still…to me the tattoo is way to classy to be considered a tramp stamp.

Then again *ponders* considering that this tattoo from [White~Widow] is called Mustang and available at The Kinky Event. With the name and placement of the tattoo it might just be an invitation to come and ride the wild mustang.

Oooh and I almost would forget, the wonderful sexy pose I am in is of course created by the ever wicked and talented eTc Poses and is called crawling.

Wow it has been almost a week since I made a post, time definite flies when you are being a lazy bum. Now I bet the next few weeks you will see a lot of Halloween themed posts, and of course you can expect a few more here as well. 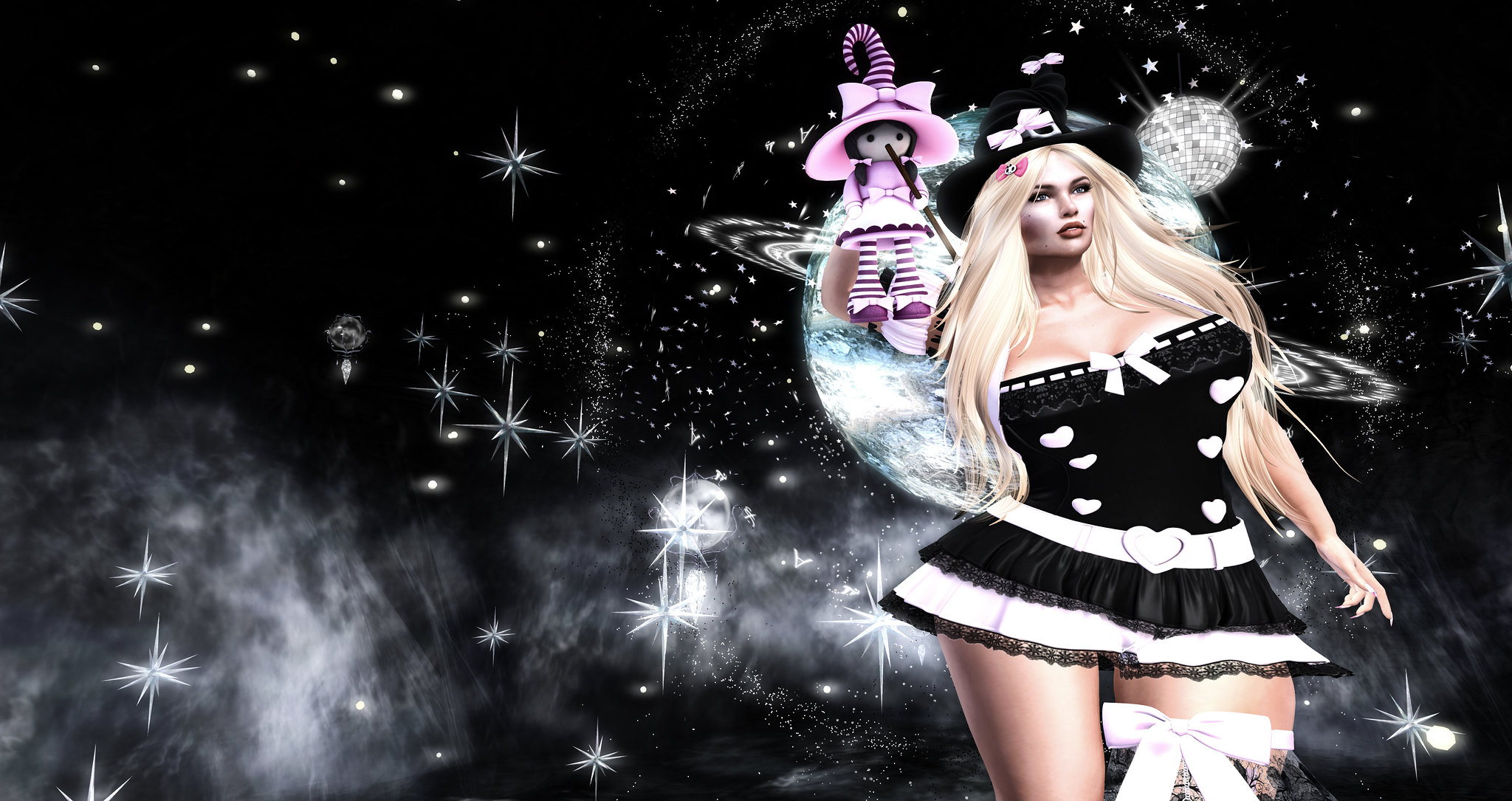 You might not guess it from this picture, but this picture was taken some time ago when I was hanging out with my dear friend Kukla. I log on one morning and then all but got yanked over to visit the wonderful sim Luanes Magical World. 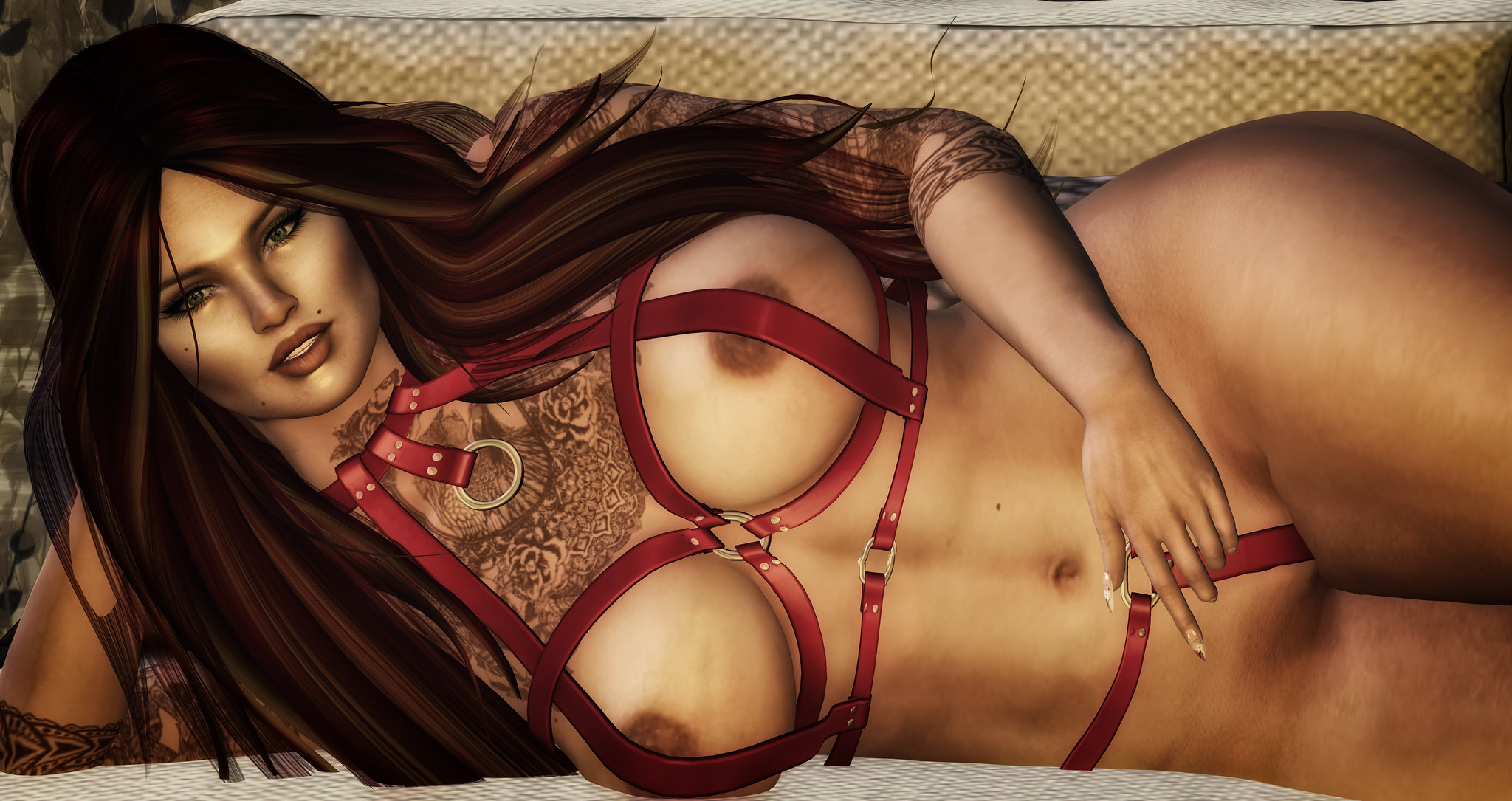 So it was here we hang out, took pictures and where the picture above was taken, and it was a good thing because I was about to set out to take a picture and show you some of the latest creations.

For example what I am wearing is the Melania from Luas that is available at The Kinky Event right now. What you do not see in this picture is the gag that comes with this outfit. Perhaps by now Kukla wishes I was wearing the gag, but it is hard to hang out and talk whilst being gagged!

Now the wonderful tattoo I am using is of course from [White~Widow] called Taken and for this tattoo you do not have to force your way into a busy event, you can simply go to the mainstore and pick it up there.

Before we know it, it will be Halloween again, the time of year where vampires, werewolves and witches roam the streets, looking for treats. This also means that the coming time you can expect a lot of Halloween type themed events and outfits. 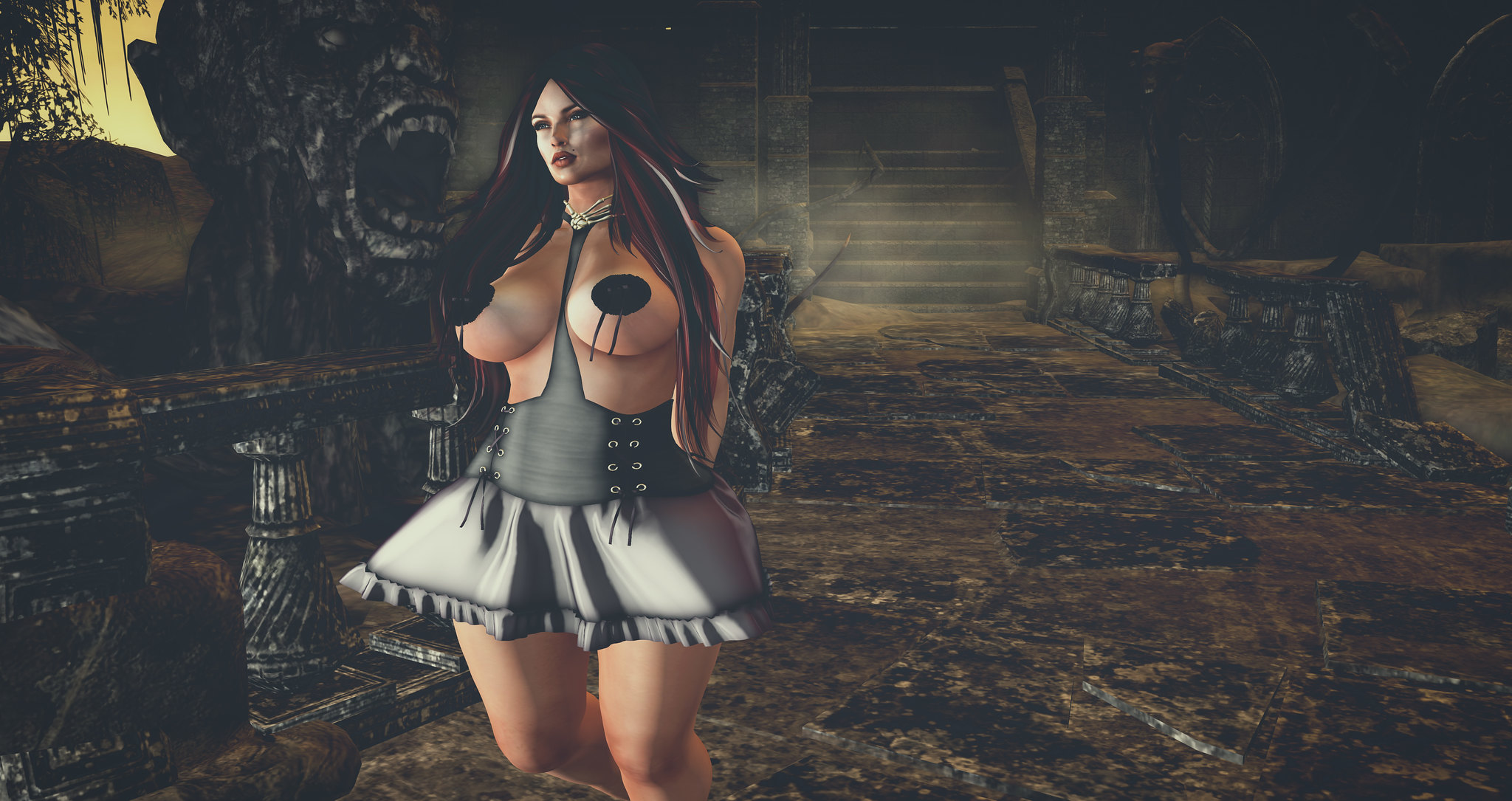 And as you can see from this picture, being a witch does not mean you cannot dress sexy! The outfit I am wearing in this picture is called Loba and is one of the latest dresses from Salt & Pepper that is available right now at the Salem event.

Where do you go to make a picture when you have an outfit to blog that is called Taste me I’m sweet. Well several things come to mind actually and all of them fun, but for this picture I choose an innocent option and made my picture on the scene of the crime. 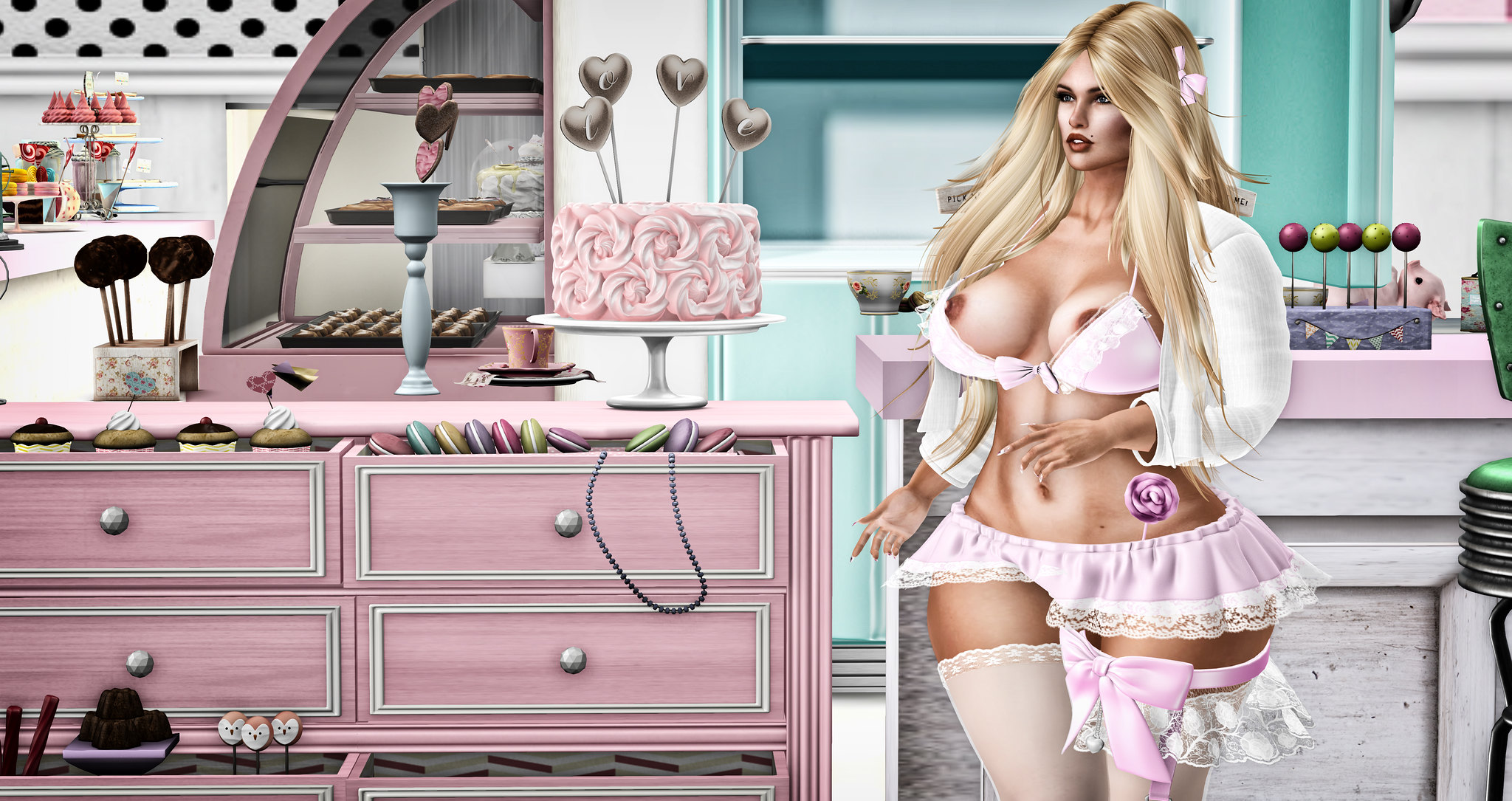 Yep that is right, I went straight to Candy Kitten and used her place to make this picture. I spend so much time there in the shop browsing and drooling, that I tend to forget there is quite a bit more to explore, hang out or as in my case snap a picture.